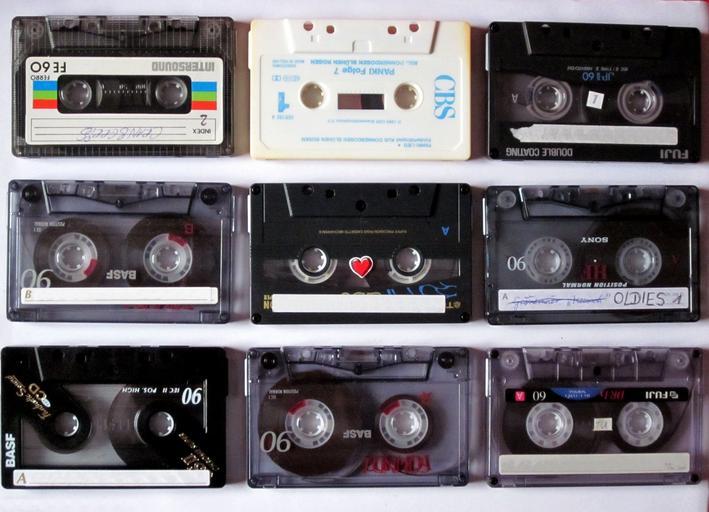 This mix is an attempt to recreate a car cassette that me and my mate Wolfie listened to endlessly in the summer of 1991. We were both converts to house, acid, techno and the UK rave scene but had always loved soul, funk and hip hop too and so our compilation tapes tended to reflect this. It was the same at raves initially too, you’d hear a broad range of styles and tempos, things like Izit’s ‘Stories’ which isn’t a house record but was played to death at raves in 89/90. Izit also influenced me at the time in other ways, as detailed in ‘Long Relationships: My Incredible Journey From Unknown DJ to Smalltime DJ’ when I was briefly in a band called Howzit:

“Wolfie and I drove around Suffolk with our mates, listening to hip hop and rare groove, getting high, wondering vaguely if we should start a funk band. I bought a wah-wah pedal for my Fender copy guitar and dabbled with a hip hop band who in the extremely short time we were together was called The Glass Bead Game, Howzit, Dub Connexshun, Jupiter X, Atlantic Ultimo before settling on Atlantico. Band names are super important when you’re in a band. I played two gigs as rhythm guitarist in legendary short-lived art-school group Purple Kevin who clearly didn’t get the importance-of-band-names memo…”

So we had a few compilation tapes which we’d rinse out in the car, some of them were DJ mixes, some were push button compilations which this particular one would’ve been – and so lots of the tunes on this mix remind me of the pair of us returning home to Suffolk for the summer having moved to London (me) and Liverpool (Wolfie), ostensibly to go to University although really to go to nightclubs. Killing time during the day, going to raves at the weekend, driving around tiny Suffolk country lanes with Maff and CJ, a  kind of local acid house Little and Large duo, who also formed the basis of the bands mentioned above. A battered, brown Ford Fiesta, rizla, red-seal, fields full of bright yellow rapeseed and that hot dusty quiet that you only get in August Suffolk, broken by the sound of our mixtapes as we clattered through another village high street. 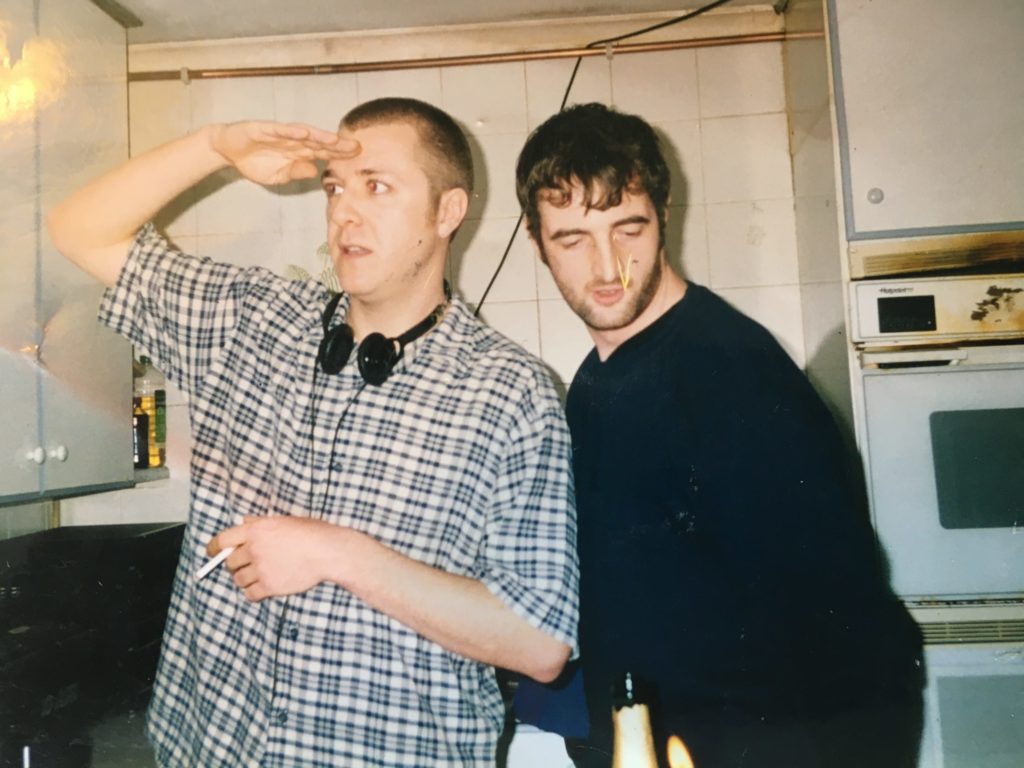 Wolfie & I DJing in someone’s kitchen circa the early ’90s

The mix begins with this nice laid back track from Galliano from their ‘In Pursuit of the 13th Note’ album. As was the case with so many records of the time, the samples they used introduced me and my friends to some great new (to us) old music as we worked out what records they’d used. And now there’s a link from today to thirty years ago, back to the tunes of our youth and further, through to tunes they sampled that were recorded when we were kids or before we were born, a groove line that you can trace back through the decades.

There’s a few big tunes included, like Coldcut’s remix of Eric B and Rakim’s ‘Paid In Full’ and a couple of stone cold bangers from Soul II Soul, both of which were from a couple of years previously but would often crop up on our compilation tapes. All these years later those Soul II Soul records sound quite minimal, with the percussion, drums and vocals pushed right to the front of the mix and the rest – synths, samples, whatever – very much treated as lower priority audio. Soul II Soul records were all about the beat and the voice, a production approach that means they still absolutely slap. Here’s the full mix tracklist by the way:

St Etienne’s cover of ‘Only Love Can Break Your Heart’ was a big tune at this time. There were all kinds of remixes of this including a Flowered UP version (remember them?), some pretty tasty MAW mixes as well as a deep dub flavoured Weatherall mix but I always loved the original most of all. With its spooky dockers-pub piano and Moira Lambert’s clear, guileless vocal it always seemed like such a sad song, that perhaps has some kind of deeper hidden story of heartbreak to it. Can’t beat a bit of melancholy in a jam.

I used to play the Norman Cook remix of Just Wanna Touch Me by Fidelfatti featuring Ronnette which had slightly more beefed up beats than this version, but like many tunes from those days that doesn’t seem to be available digitally, and my decks and records are currently bundled up in storage so I’ve included this version, because it’s all about that piano drop. Not sure it was ever a particularly big tune, in contrast to Sounds of Blackness’s ‘Optimistic’ which was massive. There was a period in the early 90s when KISS FM played ‘Optimistic’, Marathon’s ‘Moving’ and Jinny’s ‘Keep Warm’ like four times an hour. Never gets old though, ‘Optimistic’ is a genuinely inspirational piece of music, a proper tear-jerker and a time-portal of a track, sending me straight back to the summer of 91.

I dropped a couple of funk tunes into the mix in the shape of Bobby Byrd’s killer ‘I Know You Got Soul’ and Joe Quarterman and Free Soul’s ‘So Much Trouble In My Mind’. Although the rare groove scene had ended by this point, clubs still played funk music and you could go somewhere like the Electric Ballroom in Camden and still hear plenty of tunes like this mixed up with house:

“We went to the Electric Ballroom, Wendy May’s Locomotion at the Town and Country club, got turned away from The Wag for not being cool enough. You could go to Dance Wicked at the Electric Ballroom in Camden and Paul ‘Trouble’ Anderson, Trevor Madhatter, Judge Jules, Norman Jay and Gilles Peterson would be DJing across two floors, £4 to get in!” 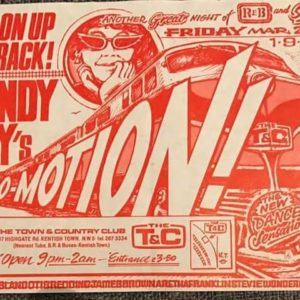 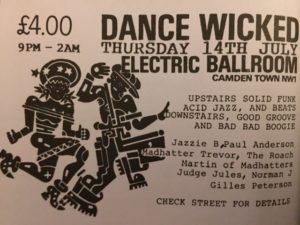 There are lots of strong songs on this mix; UK dons D-Influence make a welcome appearance with their ‘Good Lover’ as does the queen of icy melancholia Billie Ray Martin in Electribe 101’s ‘Talking With Myself’. Lots of dreamy, glowing Italian house too. I fell heavily for the piano chords, 909 snares and smooth production of Italian house during the early 90s and the Italian sound is repped here by the 707 Boyz’ ‘Emotions’ and High Tide’s ‘Emotions’.

Doug Lazy’s ‘Let It Roll’ was first released in 1989 but got lots of plays in the following couple of years because it was so sparse that tt sounded great mixed with virtually anything. It’s a weird record, some of the percussion doesn’t seem to quite work and there are points where it sounds like the rhythm is going out of time, but again, its fantastically evocative of a certain time.

Ce Ce Rogers’ ‘Someday’ gets a look in. Maybe it sounds a little trite today, a bit naive but at the time, many of us actually believed these lyrics. There was something embedded in house music’s DNA, a strong seam of musical and lyrical ideas that came from soul music and gospel, music inherently American but which also somehow has always spoken to British white youth too. Within much early house music there were themes of redemption, liberation and freedom, of promised lands, new futures, harmony, one love and these themes were intensified and distilled by the huge youth culture experiment taking place in the British raves. Somehow these lyrics fitted our mood and our dreams, even if we were in a field in Suffolk watching the sun come up while dancing to a sound system rather than deep in a Chicago club or Detroit basement. It didn’t matter where we were from or where we were at, all over the world we felt the unifying power of this new music.