Continuing my series of mixtapes to complement my book ‘Long Relationships: My Incredible Journey From Unknown DJ To Smalltime DJ”, here’s a mix to go with (approximately) chapters 6 and 7.

The tunes on this mixtape are from around 94/95ish when my mates and I moved our party Blow Your Own from Greenwich University Student Union to the Eauzone nightclub in Woolwich. I was playing US house, UK progressive house with lots of crowd-pleasing piano house too. Handbag house was on the rise and in little pockets of London the tech house scene was being born. I played quite a broad range of stuff at the time, from quite deep and tribal house to big vocals and uplifting bangers and some techno, as witnessed on this mix.

We put on our own parties at the Eauzone and I was also club resident so got to DJ at lots of other decent events too, Such fun and I learnt so much about DJing, about the rapport that a truly great DJ develops with their audience. I loved playing in the bar more than the main room by the end of our time at the Eauzone because you were on the same level as your dancers rather than up in the booth or on the stage in the main room. There was no hiding if your selection fell flat or if you dropped your mix, but equally, you could see their eyes, you could read their body language, you could, hopefully, actually read the crowd, work out what they want and then serve it up. A good set in the Eauzone bar was a mini DJ triumph, a pleasure and a treat all in one.

“They had a brilliant sound system in there, with a superb toothless sound engineer in attendance all night. I can’t recall exactly what I played on that first night, but luckily Fannah somehow kept his cassette collection from those days, so I have a DJ mix of mine from 1994. It’s very fast. We used to play our music substantially pitched up to match the energy of the times and to suit our own need for speed. The cassette features UK house from labels like Soma, Junior Boys Own, Stress, Sun-Up, Global Grooves, some US house dubs from Strictly Rhythm, Emotive and Nervous, some techno, some Italian piano house, lots of music I have no recollection of ever buying, a few vinyl wobbles in the mix and bags of enthusiasm. If you caught me DJing in ’94 you’d be treated to a few long transitions à la DJ Sasha, some key-matched mixes which I remember being particularly pleased with, and way more cheesy vocal samples than I remember playing.”

The Eauzone is just a footnote in London’s club history, another forgotten business enterprise that didn’t make it. At the time it was of only two venues in the whole of South London that had a 7 am licence, the other being the Ministry of Sound. It was a great multi-purpose space, with a superb indoor terrace, state of the art sound system, pro lighting rig – on paper it had a lot going for it. Its location in Woolwich though, was always against it, it was hard to get people to commit to coming out to the South London suburbs for a club night. It’s just another could-have-been in London’s club history, but it was terribly good fun for a while. 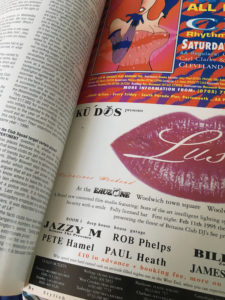 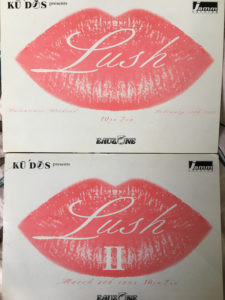 The ‘Lush’ parties at the Eauzone were good bashes, I even got my first Mixmag appearance, and under my real name 🙂 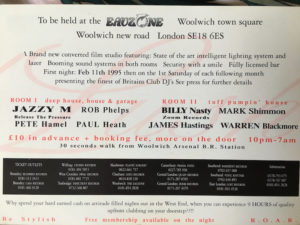 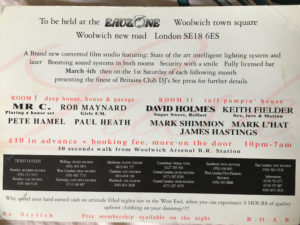 Sure Is Pure – Disco’s Dare

La Luna – To The Beat Of The Drum

Reefa – You Can’t Stop The Groove

Alcatraz – Give Me Love

Mr Roy – Something About You – Deerstalker Dub

The African Dream – All The Same Family